In earlier days, switches and fuses were placed in series to control (ON or OFF) the various circuits under both normal and abnormal (faulty) conditions. But the problem arises when fuse blows out it takes a considerable time to replace it and also not able to operate successfully under high voltage or have faults. Which affects the continuity of supply and reduced reliability of power system. To avoid this problem a device is used in modern days known as circuit breakers. Modern circuit breakers are able to operates at low voltages as well as very high voltage and also able to carry large current.

Therefore, circuit breaker is a very important power system device design to open or close the various electric circuits under both normal and faulty condition it can operate manually under normally conditions and automatically under faulty conditions.

A circuit breaker has ability to operate manually as well as automatically under all condition viz no load, full load and faulty conditions.

Under normal conditions, the circuit breakers are able to operate manually. In this way, circuit breaker ensure the safety of workers while maintenance of power system.

Although, the basic function of circuit breaker is to open or energized the power system when protective really detect any fault. 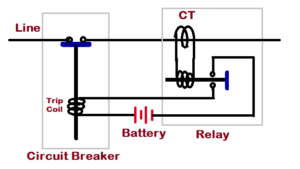 A circuit breaker consists of two electrodes, one is fixed and another is moving. Under normal operating condition, these two electrodes are in contact with each other and circuit is closed. The circuit will not open automatically until and unless the system become faulty. The contacts can be opened manually or by by remote control whenever desired.

When a fault occur on any part of power system, the trip coil of circuit breaker get energized and the moving electrode is pulled by electromagnet and thus opening the circuits.

The construction and design of circuit breaker becomes more complicated for high voltage power system and heavy faults.
When the contacts of a circuit breaker are separated under faulty conditions, and arc is structed between them. The current is thus able to continuous until the discharge ceases. The production of arc preset two disadvantages:
Firstly, it delay the current interruption process and secondly, it may generate heavy heat which cause damage to system or circuit breaker itself. Therefore, the main problem in a circuit breaker is to extinguish the arc within the shortest possible time.

1. It operates at high voltage as compared to fuse.
2. It protect the higher voltage system from damaged.
3. Circuit breaker can operate its manually which can not done in fuse.
4. No need to replace the circuit breaker after fault.
5. It increases the reliability of power system.

Types tests
These tests are conducted on first few prototype circuit breakers of each type for the purpose of providing the capability is and confirming the return characteristics of the circuit breaker of that designed. Type tests can be classified as mechanical performance test, thermal tests, dielectric insulation tests and short circuits tests in order to check making capacity, breaking capacity, short time braking current and operating duty.

Routine tests
Once type tests are conducted and a particular design is found to be satisfactory the product it becomes prototype and largest number of circuit breakers of similar designed are manufactured. However, each and every circuit breaker is still so subjected to a few more test before commissioning. These tests are called routine tests.
Routine tests can be classified as
– Power frequency voltage tests
– Millivolt drop test and
– Operating tests.