When the contacts of a circuit breaker are separated, there is a luminous electric discharge between these two contacts known as ‘Arc’. This arc may continue until the discharge ceases. The production of arc may delay the current interruption process and generate emormous heat which may cause serious damage to system or to circuit breaker itself. Therefore, the main problem in a circuit breaker is to extinguish the arc within the shortest possible time.

How does Arc produce

The voltage that appears across the contact of circuit breaker during arcing periods is called Arc voltage.

In this method, the arc resistance is increases gradually so that current is reduced to such a value that heat is insufficient to maintain the arc.

Consequently, the current is interrupted or the arc is extinguish. But in this method, major work is to increase resistance between contacts. Resistance of arc may be increased by
1. Lengthimg the arc: As length of arc increases, the arc resistance also increases. The length of arc can be increased by increasing the gap between contacts.
2. Cooling of arc: Cooling help in de-ionisation of the medium between the contacts. This increases the arc resistance and remove the heat from arc.
3. Reducing cross sectional area of arc: By reducing the cross section area of arc the voltage necessary to maintain the arc is increased. This can done by allowing the arc pass through the similar area compared to wide area.
4. Splitting of Arc: The resistance of the arc can be increased by splitting the arc into a number arc in series. These may be split by introducing some conducting plates between the contacts of circuit breaker.

The major disadvantages in this method is that is very high energy is dissipates in the arc. Therefore, it is the employed only in dc circuit breaker and low capacity is ac circuit breaker.

This method is applicable only in ac circuit breaker because ac has natural zero of current. 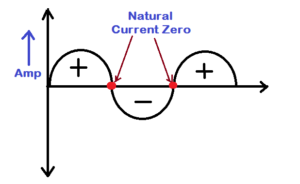 As we discussed that the arc at as a conducting path it means it offers low resistance. In this method the arc resistance is kept low until the current magnitude become zero (natural zero) because at every current zero arc extinguishes for a short period.

As the medium (air or oil) between contacts contain ionised particles so it has small dielectric strength. Therefore ionised air can easily breakdown by the contact voltage and arc will persist for another half cycle. The voltage that appear across the contacts at current zero during arcing period is called is re-striking voltage.

As we discussed there is natural zero in ac. At every current zero, the arc is extinguishes for a short period. Within this time period, if the dielectric strength of medium between contact is the increases to such a value that voltage across the contact become insufficient to breakdown the space between contacts, then arc fail to re-strike and the current will interrupted.
But the major challenge is to increase the dielectric strength of medium near current zero. There are following two ways to achieve this

1. Causing the ionised particles in the space between contact to recombine into neutral molecule.