Three phase induction motor is the most common popular type of AC motor. It is very commonly used for industrial drives since it is cheap, robust, efficient and reliable. It has good speed regulations and high starting torque. It requires little maintenance and has a reasonable over load capacity. Poly-phase induction motor is considerable the most widely used AC motor. It is different from other type of motor because there is no electrical connections from the rotor winding to any source of supply. Then necessary  voltage and current in the circuit are produced by induction from the stator winding. That is why it is called an induction motor. The induction motors essentially consist of stationary path known as straight and revolving part known as rotor.

Stator: Stator of an induction motor is similar in construction to that of 3 phase synchronous alternator. In polyphase induction motor stator winding is usually arranged for three phase power supply. The face of which better design for the particular machine it is wound for a definite number of poles as per requirement of speed.

Rotor: The rotor employed in a three phase induction motor may be any of the two types namely scale case or bond rotor type squirrel cage and wound rotor type.

Wound Rotor: As the name indicates, such rotor is wound with an insulated winding similar to the rotor winding and for the same number of poles as that of stator the rotor winding is always three phase winding even when the screen is found for 2 phase. The winding is made in slots and connected to first forest bronze slip ring at one end and the rotor shaft.

Principle of operation
In direct current motor current is drawn from the supply and conducted into the armature conductor through the brushes and commutator the armature conductor carry current in the magnetic field established by the field circuit, a force is extracted on the conductor which can move them at right angle to the field.
Though in an induction motor, there is no electrical collections to the rotor but current induced in the rotor circuits and therefore the same conditions exist as in the DC motor i.e. the rotor conductors carrying current in the magnetic field and thereby have a force exerted on them which tends to move them at right angle to the field. 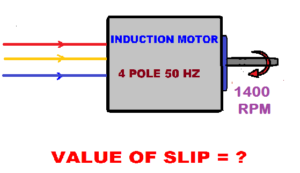