How does a resistor work?

Suppose we connect a resistor in circuit. When the electron passes through it, the average speed of electrons is reduced and loss energy. 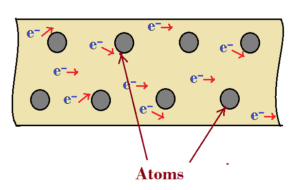 When the electrons move through resistor, they collide with the atoms of the resistor and this affect the speed of electrons. Each collisions took some energy out of electrons.

Under normal condition, the atoms are almost stationery and electrons collide continuously with the atoms of resistor. Hence it act as barrier to the flow of electron. Therefore average speed of electron is reduced and electron also loss energy.

Beside this, if you recall the theory of molecules energy level and forbidden energy gap of molecules. It says electrons require energy to jump from valance band to conduction band. This energy is different for different materials depends upon how tightly electron bound to the nucleus of atom. In resistive of material, forbidden energy gap is small has it require more energy to jump electrons. Therefore, easier it for electrons of a molecules to jump from valance band to conduction band, less will be the resistance of material.

2. Non linear resistors are the resistors, in which current does not changes linearly with change in applied voltage i.e. these resistors do not obey the ohm law.

How does capacitor work?

The two charges would like to reutine with one another what cannot. Therefore, there is an electric potential energy associated with interacting charges and this is the stored energy in its electric field.

How does inductor work?

How does an inductor stores energy?
Before understanding the working of inductor you must have clear picture of how inductor is made or manufactured.

To understand the working of inductors you have to learn how does an inducted stores energy?

How does inductor stores energy?

When the current start flowing through coil, the coil has tendency to build up a magnetic field. During this process of building magnetic field, the coils opposes the flow of electrons through it i.e. opposition to current. To overcome this opposition, the electrons have to release or utilised some of its extra energy which is stored in the form of magnetic field.

Therefore, to build the magnetic field, an inductor takes the kinetic energy of moving electrons and store it in the form of magnetic field.

Suppose a current ‘I’ is flowing through an inductor of inductance ‘L’, then